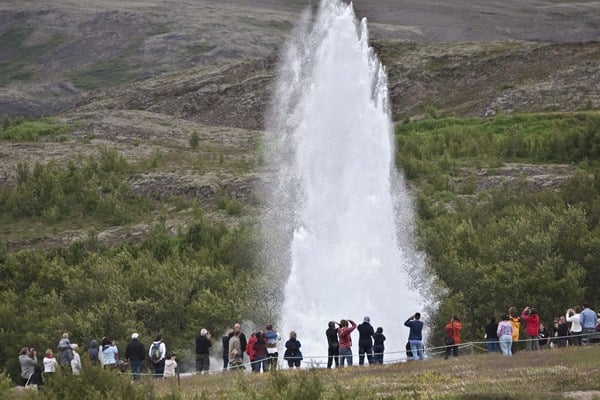 One of the greatest natural attractions of Iceland, The Great Geysir has been dormant since 1916 when it suddenly ceased to spout. It came to life once in 1935, and as quickly went back to sleep. It is not exactly known when Geysir was created. It is believed that it came into existence around the end of the 13th century, when a series of strong earthquakes, accompanied by a devastating eruption of Hekla, hit the geothermal valley where Geysir is located. What is known is that it spouted regularly every third hour or so up to the beginning of the 19th century and thereafter progressively at much longer intervals, until it completely stopped in 1916. Whether its silence is eternal or temporary no one knows. When it was alive and shooting, it could thunderously blast a spectacular jet of superheated water and steam into the air as high as 80 meters. Its opening is 18 meters wide and its chamber 20 meters deep.

Though the Great Geysir itself is now more or less inactive, the area surrounding it is geothermically very active with many smaller hot springs. The attraction of the area is now Strokkur, another geyser which erupts at regular intervals every 10 minutes or so, and its white column of boiling water can reach as high as 30 meters. The whole area is a geothermal park sitting on top of a vast boiling cauldron. Belching sulphurous mud pots of unusual colors, hissing steam vents, hot and cold springs, warm streams, and primitive plants can all be found here.