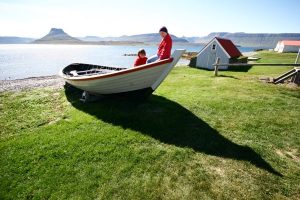 Puffins, eiders, guillemoths and arctic terns are this bird-island’s magnets, and they are all abundant. Indeed, as the puffins, which nest in burrows, have dug through much of the island’s soil, travellers have to follow a certain path to avoid falling into one. This small bird, by some dubbed the penguin of the north, is a clumsy flier but impresses visitors by artfully stacking its beak full of sand eel or small fish, carrying it home to its hungry chicks. Being the opposite of the hospitable humans that live on the island, the arctic-tern fights to keep intruders away. Luckily, a stick held above the head does the trick. Eiders and humans share a mutual beneficence; eiders get protecion by nesting in close vicinity of the people, who collect the precious down-feathers from the eider nests. One of the every day event is when locals feed a group of orphan eider chicks.

In Vigur you find the smallest post office in Iceland, as well as the only windmill and beautifully renewed houses. The inhabitants spend much of the winter preparing the eider down-feathers, collected over the summer, for export. To get to Vigur, there is a daily boat tour from Ísafjörður.